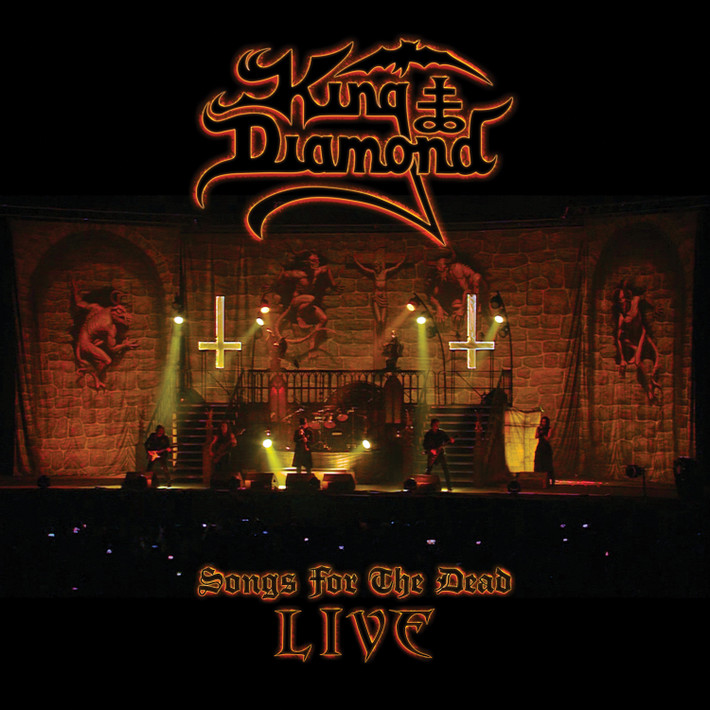 There is only one King Diamond, and for more than thirty years the great Dane has been dropping classic albums and putting on shows fans remember for the rest of their lives. Perhaps the only downside to having such a formidable catalogue is that there are just too many great songs to fit into a single set. However, you would be hard-pressed to find a fan who wouldn't want to hear 1987's seminal Abigail in its entirety, and Songs For The Dead Live captures this, twice, and in very different locales. Boasting eighteen songs per set, each of the two shows - Belgium's Graspop Metal Meeting in June 2016 and Philadelphia's Fillmore in November 2015 - feature a brace of classic King Diamond and Mercyful Fate tracks including "Welcome Home," "Halloween," and "Eye Of The Witch" before launching into Abigail. The performances of the all-star lineup of musicians, comprising of guitarists Andy LaRocque and Mike Wead, bassist Pontus Egberg and drummer Matt Thompson, are absolutely ferocious, hammering home every single moment.

Captured on film by director Denise Korycki for Wild Wind Studios, she worked closely with King on every aspect of filming, and throughout the viewer finds themselves front and center as the shows unfold. This includes some inventive camera placement, such as riding in on the back of the wheelchair as it is wheeled out to "Out From The Asylum" at the start of the show, or looking up from the coffin at the commencement of Abigail opener "Funeral", which adds an extra dimension to proceedings. Naturally, the theatricality that has become synonymous with King Diamond is there in full force, making for an even more immersive experience. The gothic stage set and the participation of actors playing out certain scenes tying into the songs definitely increases the drama and the sense of complete disconnect from the trappings of reality, ensuring that the shows remain riveting from start to finish.

There is only one King Diamond, and for more than thirty years the great Dane has been dropping classic albums and putting on shows fans remember for the rest of their lives. Perhaps the only...

Eagles 'Live From The Forum MMXVIII' 2CD & BLU-RAY Of Performance

26-Song Performance Recorded at the Fabulous Forum in September 2018 Featuring First Eagles’ Recordings with Vince Gill and Deacon Frey The Eagles spent the majority of 2018 on an extensive...

There is only one King Diamond, and for more than thirty years the great Dane has been dropping classic albums and putting on shows fans remember for the rest of their lives. Perhaps the only...

Released in 1986, Fatal Portrait is the debut King Diamond album, unusually not a concept album, although five of the songs link to form a short ghost story, a theme that would be returned to again...

Released in 1990, The Eye is the fifth King Diamond album, and is the only album to feature drummer Snowy Shaw and the last to feature guitarist Pete Blakk until his return on Abigail II: The Revenge...

The Dark Sides is a compilation of King Diamond songs, originally released in 1988. This album contains some rare tracks and B-sides from 12'' singles Track List... Side A01 Halloween02 Them03 No...