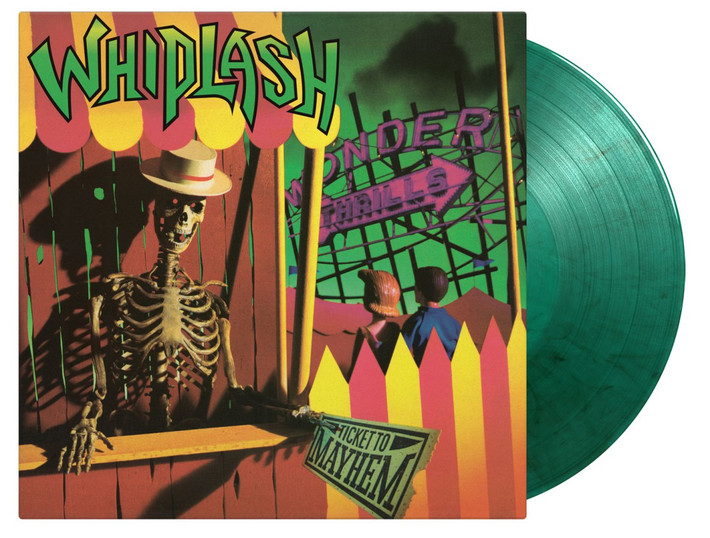 Just one year after unleashing their debut album 'Power And Pain', Whiplash were back with the follow-up 'Ticket to Mayhem'. The band had experienced a few changes in the short interim between both albums, beginning with their drummer Tony Scaglione, who joined Slayer (just briefly). But more important, vocalist/guitarist Tony Portaro and bassist Tony Bono explored a broader range of lyrical subjects, tempos, and arrangements on this second album. This album sounds somewhat cleaner, more mature and has a more professional “produced” sound.

'Ticket to Mayhem' showed that Whiplash possessed both the chops and pedigree to hang in with all the top league thrash bands of the era.

'Ticket To Mayhem' is available as a limited edition of 1000 individually numbered copies on swamp green coloured vinyl and includes an insert.

1. PERPETUAL WARFARE
2. WALK THE PLANK
3. LAST NAIL IN THE COFFIN
4. DROWNING IN TORMENT
5. THE BURNING OF ATLANTA

Over 15 years, Germany’s Downfall Of Gaia have carved a unique space in the metal scene, evolving naturallyand unafraid to take risks. With sixth album 'Silhouettes Of Disgust' they progress in part...

Originally released in 1988, “Under The Influence” was Overkill’s second release for Atlantic Records. The band supported the release by touring with the likes of Motörhead, Slayer and Testament. The...

Originally released in 1987, “Taking Over” was Overkill’s firstrelease for Atlantic Records. Features the classics “In Union We Stand” and “Wrecking Crew” Limited pink and black marble vinyl...

Marking their 15th studio album, 'We Are Motörhead' features a cover of the Sex Pistols song ‘God Save The Queen’ for which the band recorded a video atop an open top London Routemaster bus. The...

FM are a British rock band formed in the summer of 1984 in London. 'Tough It Out' is their second studio album from 1989. When CBS folded the Portrait label, FM switched to Epic. The Overland...