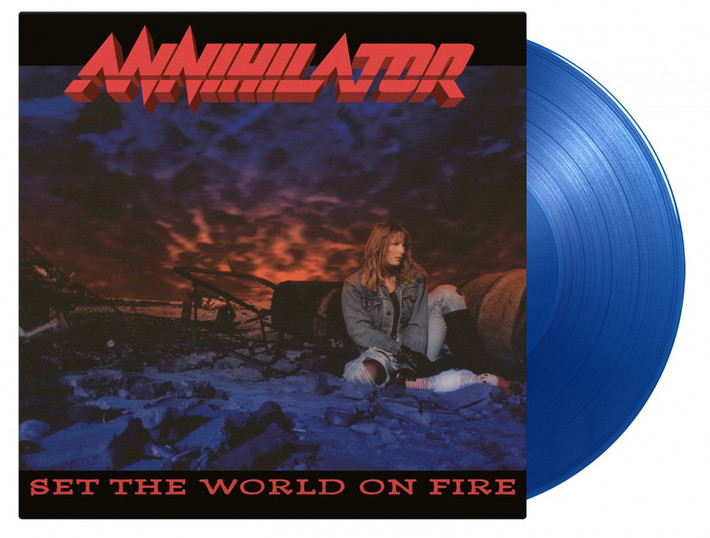 Canadian heavy metal band Annihilator is known as the highest-selling Canadian thrash metal group in history, having sold more than three million albums worldwide. One of their successes was the third studio album 'Set The World On Fire', which was originally released in 1993 on the Roadrunner label. It was also their last album on the heavy metal label. At that time, the formation included band leader and guitarist Jeff Waters, vocalist Aaron Randall, guitarist Neil Goldberg and Mike Mangini on drums. Mangini is also known as the drummer of Dream Theater. The album features fan favourites like “Knight Jumps Queen”, “Brain Dance” and the title track, which are all setlist regulars to this day.

'Set The World On Fire' is available as a limited edition of 3000 individually numbered copies on translucent blue coloured vinyl and includes an insert with lyrics.

'In The Nightside Eclipse' was the black metal legends debut full length album released in 1994, showcasing the grandoise and epic style they perfected with subsequent releases This iconc recording...

'Anthems to the Welkin at Dusk' was the black metal legends second full length album released in 1997. The opening to 'Ye Entrancemperium' was written by Euronymous from Mayhem, and overall the album...

Nailbomb was a side project by Sepultura's Max Cavalera and producer/engineer Alex Newport in the mid-1990s. 'Point Blank' is their only studio album, originally released in 1994 by Roadrunner...

American epic doom metal band Solitude Aeturnus was founded in 1987 as Solitude and is led by vocalist Robert Lowe. Their sound has been linked to Candlemass and Fates Warning many times. In total,...

Nailbomb was a side project by Sepultura's Max Cavalera and producer/engineer Alex Newport in the mid-1990s. 'Point Blank' is their only studio album, originally released in 1994 by Roadrunner...