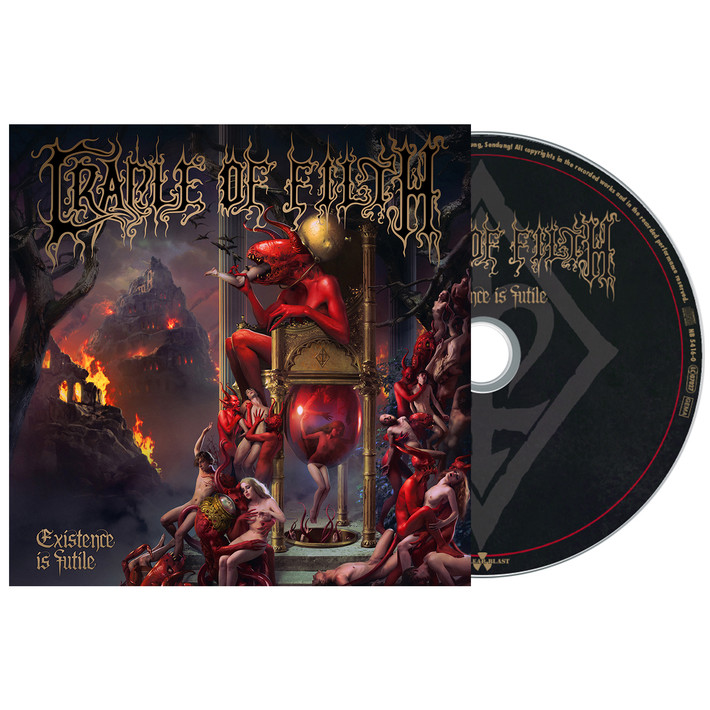 Belched from Hell’s depths into the rustic charms of the Witch County, Suffolk thirty long and disturbing years ago, CRADLE OF FILTH are undisputed giants of the heavy metal realm. Imperious purveyors of a perennially unique strain of dark, dastardly and wilfully extreme metal, with deep roots in the worlds of gothic horror and occult curiosity, the band led by Dani Filth has weathered three decades of tumult and trial, earning a formidable reputation as both a singular creative force and one of the most riotously entertaining live bands the metal world has ever produced.

From primitive early works like 1992 debut »The Principle Of Evil Made Flesh« to more expansive and theatrical classics like ‘Cruelty And The Beast’ and ‘Midian’, CRADLE OF FILTH defied trends and constructed their own idiosyncratic world of foul grandeur, becoming one of the UK’s most notable metal bands in the process. Since then, they have traversed the world countless times, hoovering up plaudits and praise from an ever-expanding international fan base. Resolutely prolific, the band’s catalogue has grown in depth and stature all the while, irrespective of line-up changes or the whims of the faithful.

In more recent times, CRADLE OF FILTH have hit an unmistakable hot streak of creativity and urgency. As a new line-up coalesced around the creation of 2015’s »Hammer Of The Witches«, fresh impetus propelled the band to new heights, as the revitalised crew became more in demand around the world than ever before. 2017’s ‘Cryptoriana - The Seductiveness Of Decay’ repeated the trick with even more explosive flamboyance. Until a global pandemic brought the music industry to a jarring halt, CRADLE OF FILTH were almost permanently on the road and absolutely fucking flying. As a result, it should surprise no one that the band’s brand new album, ‘Existence Is Futile’, is yet another monumental and electrifying journey through the dark.

Buoyed by these recent triumphs, CRADLE OF FILTH recorded »Existence Is Futile« during 2020, piecing the record together in isolation, at Grindstone Studios in Suffolk with studio guru Scott Atkins (Devilment/Benediction/Vader). Although instantly recognisable as the work of these veteran blackhearts, the thirteenth CRADLE OF FILTH album is a wholly different beast from its immediate predecessors. Pitch-black, perverse and at times absurdly brutal and extreme, it hangs together with mesmerising fluidity. It is also absolutely rammed with giant, rousing melodies and moments of jaw-dropping invention. No one could mistake the venomously catchy likes of ‘How Many Tears To Nurture A Rose?’ or monstrous ballad ‘Discourse Between A Man And His Soul’ for anything other than CRADLE OF FILTH, of course, but ‘Existence Is Futile’ confirms that the band’s exploratory instincts remain as sharp as ever.

1.The Fate Of The World On Our Shoulders

6.Black Smoke Curling From The Lips Of War

7.Discourse Between A Man And His Soul

8.The Dying Of The Embers/9.Ashen Mortality

10.How Many Tears To Nurture A Rose?

13.Sisters Of The Mist (bonus track)

Cradle Of Filth 'Hammer Of The Witches' (Black) T-Shirt

Cradle Of Filth 'Cruelty And The Beast - Re-Mistressed' CD

Cruelty and the Beast is the third studio album by English extreme metal band Cradle of Filth. It was released on 5 May 1998 by record label Music for Nations. A remixed and...