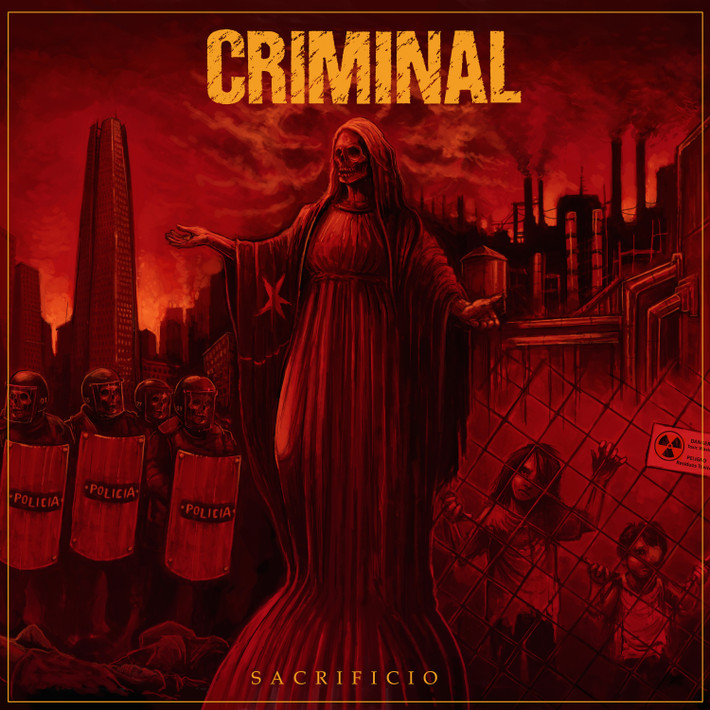 Sacrificio is CRIMINAL’s ninth full length studio album; a twelve track bludgeoning that harks back to their roots - both literally and metaphorically. With a rich history behind them, and the future unwritten before them, CRIMINAL have delivered Sacrificio - an album that could only have been made by these four musicians at this point in time.

For a band that originally formed out of the ashes of 80’s death metal legends, Pentagram, the album highlights the benefits of embracing the band's origins; writing and recording took place in Chile for the first time since the 1990s. CRIMINAL continues to prove that South America can create powerful death metal on its own terms. For Sacrificio, much of the material was written in the old fashioned way - jamming in a sweaty rehearsal room, refining as they went.  The old school vibe is further enhanced by the natural sounding production of Seba Puente which adds to the immediacy and live feel found throughout 'Sacrificio'.

1. Live On Your Knees

Cannibal is the sixth studio album by British metalcore band Bury Tomorrow. Originally scheduled for release on 3 April 2020, it was released on 3 July 2020 through Music For...

Sacrificio is CRIMINAL’s ninth full length studio album; a twelve track bludgeoning that harks back to their roots - both literally and metaphorically. With a rich history behind them,...

'Queen of Time' is the 13th studio album by Finnish heavy metal band Amorphis.Tracklist:1. The Bee2. Message In The Amber3. Daughter Of Hate4. The Golden Elk5. Wrong Direction6. Heart Of The Giant7...

Sacrificio is CRIMINAL’s ninth full length studio album; a twelve track bludgeoning that harks back to their roots - both literally and metaphorically. With a rich history behind...

Portrait 'At One With None' CD

When it comes to modern heavy metal there are few bands operating at the same level as Portrait. For a decade and a half the Swedish unit have been forging their own path, and in the process infusing...

If you look at Jim Matheos’ career, across his role at the helm of the pioneering progressive metallers Fates Warning, to his collaborations in OSI and Arch/Matheos, and his...