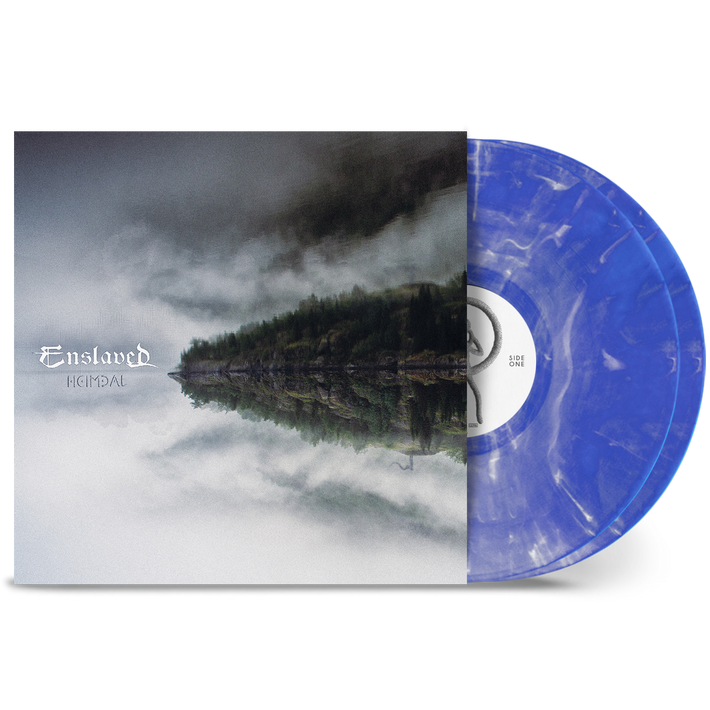 In true Enslaved fashion, the Bergen voyagers’ 16th album, 'Heimdal', is both a departure and a communion with roots forged over three decades ago in the turbulent birth throes of Norway’s black metal scene. Founded in 1991 by the then precociously young Ivar Bjørnson and Grutle Kjellson, Enslaved were determined to set out on a different course from their Satanic, church-burning peers, turning their attention towards Viking lore and writing the majority of the lyrics for their 1994 debut album, 'Vikingligr Veldi', in Icelandic for its proximity to Old Norse.

If subsequent albums, 'Frost' and 'Eld' – spelling out the dynamic, combinative properties of ice and fire – remain incandescent marker points for Norway’s black metal scene, they were signposts too. Contained within their fevered, sloshing riffs and pomp-infused atmospheres were swells of anticipation and an embryonic sense of destiny. They were tantalising glimpses of the wide-open spaces that have become Enslaved’s guiding principle as they’ve come to straddle the extreme and progressive worlds, with their restless spirit the source of an ongoing journey of wide-eyed discovery.

2020’s 'Utgard' album was the beginning of a new phase for the band, delving deeper into the esoteric nature of Nordic mythology, but finding more precise jump-off points for a leap into the unknown. More streamlined than its multi-layered predecessors, 'In Times' and 'E' , if only to prise open new expanses to explore, its ruminations on the shadowy, titular land of the Norse Jotun ice giants found parallels with the psychological states of the unconscious, and the pilgrimage into our own hearts of darkness that’s the start of the route to all self-knowledge. Of course, even themes of introspection were transformed into kaleidoscopic sonic adventurism, ranging from blackened, frostbitten charges, through lush, billowing, groove-bolstered updrafts to view-above-the-cloudline vistas and even dives into syncopated, krautrock-inspired wormholes.

For Enslaved, each stage of a journey plants a seed for the next. After 2021’s interim EP, 'Caravans To The Outer Worlds', 'Heimdal' offers another tangential act of discovery, another embarkation point for a solemn, expectant and exhilarating passage through the realms of the senses.“Heimdal” is named after arguably the most mysterious entity in Nordic mythology. Most famously known as the gatekeeper between the nine Norse realms, he’s a source of constant speculation, as scholars continue to offer new interpretations of his origins, and his purpose.

The father/son relationship between the Heimdal and Odin figures mirrors the journey Enslaved have been on for 30 years: the dialogue between older and younger versions of oneself, and whether they are separate, or bound as one. As Ivar says, “It feels like yesterday we were 15 or 18 years old, driving around Haugesund throwing eggs at people during a rehearsal break, and then what the fuck, we have kids? It's sort of a mid-life Ragnarok – not a crisis, but a turning of the corner. Whether it’s the security you now have, or because you’re now dying in a sense more than growing up, that search for uncertainty becomes even more pressing.”

If you find yourself not knowing where 'Heimdal' is going to take you next, that is very much the point. The album is bookended by “Behind The Mirror” and the title track itself, both of which reflect each other conceptually, in terms of being in thrall to their own of transitional states.

“I would say that 'Heimdal' is an album that points towards new beginnings and a dawn that’s on the other side of the apex of the land,” Ivar explains. “You don’t know what’s on the other side, but you go there. It’s a continuation of the ‘Utgard’ concept. Of course, you have to go into the darkness, that’s all metal and good, but the consequence is that you have to go into the dawn and see what the new day brings.”

'Heimdal' is reflection of paths travelled, a promise of a new beginning, and a rite of passage between the two. Truly an album for all times.

2. Caravans To The Outer World

In Flames represent the best of metal’s past, present, and future. In Flames are as vital and even more energized today than when they unleashed classics like 'Come Clarity' and 'Clayman' in decades...

In true Enslaved fashion, the Bergen voyagers’ 16th album, 'Heimdal', is both a departure and a communion with roots forged over three decades ago in the turbulent birth throes of...