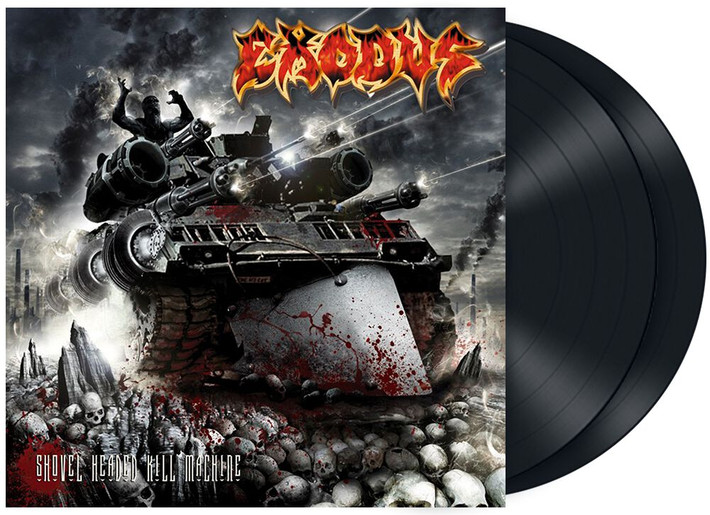 Exodus is an American thrash metal band formed in 1979 in Richmond, California. Their current lineup consists of guitarists Gary Holt and Lee Altus, bassist Jack Gibson, drummer Tom Hunting, and lead vocalist Steve "Zetro" Souza. There are no original members left in Exodus other than Hunting, who has departed from the band twice, in 1989 and 2004, but rejoined in 2007. Exodus is also notable for being guitarist Kirk Hammett's band before he left in 1983 to join Metallica as Dave Mustaine's replacement. Holt, who replaced original guitarist Tim Agnello in 1981, has been most consistent member throughout various lineup changes and break-ups

Shovel Headed Kill Machine is the seventh studio album by the American thrash metal band Exodus, released on October 4, 2005 through Nuclear Blast. It's the first album to feature new vocalist Rob Dukes, after the departure of Steve "Zetro" Souza during the band's South American tour in support of the band's previous album Tempo of the Damned. It is also the band's first studio album not to feature Rick Hunolt on guitars, with Lee Altus as his replacement, and the only Exodus album to feature Paul Bostaph on drums after Tom Hunting's second departure as a result of the reoccurrence of the illness that prompted him to depart in 1989.

'Nimrod' is the fifth studio album by American punk rockers Green Day released in October 1997, the dollow up to the 'Insomniac' album.  It contains the acoustic hit 'Good Riddance (Time Of Your...

'Future Warriors' is the one and only album released by NWOBHM band ATOMKRAFT. Atomkraft is a band best known for its bassist/vocalist Tony Dolan, who went on to replace Cronos and front Venom in the...

Overkill are an American thrash metal band, formed in 1980 in New Jersey. They are often called 'the Motörhead of thrash metal', based on their unique playing style, which was influenced by punk rock...