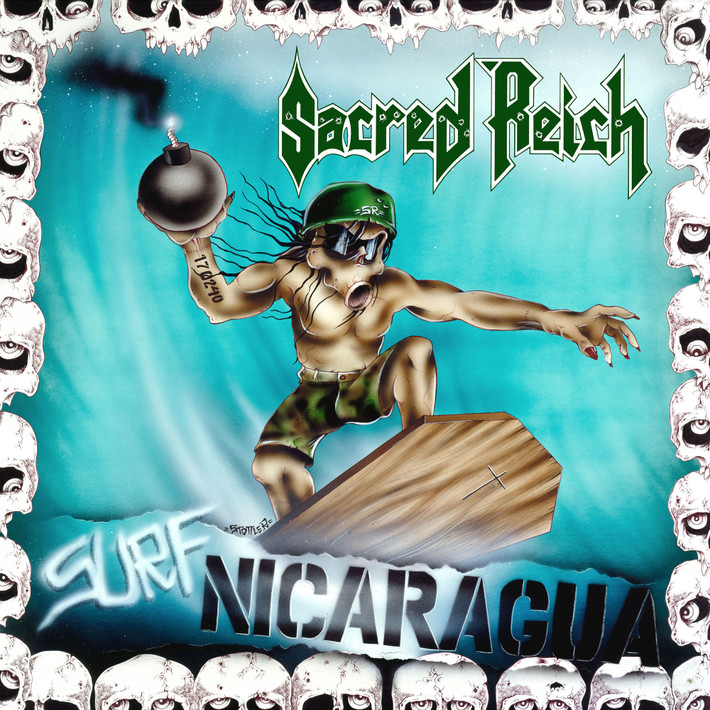 This is a 2021 reissue of this classic EP, comes compleate with 4 page booklet.

Formed in 1985, Sacred Reich were an integral part of the 80s and 90s thrash movement, dropping four albums before splitting in 2000. They would go on to reform in 2006 but strictly as a live act, dropping the Live At Wacken DVD in 2012, but it was only in 2018 that they started to work on new material and would go on to release Awakening to critical acclaim in 2019.

Surf Nicaragua is an EP from Arizona thrash metal band, Sacred Reich. It was released on October 4, 1988 on Metal Blade Records and follows the band's debut album, Ignorance, released the previous year.

The EP contains a cover version of the Black Sabbath song, "War Pigs", which also appeared on the band's next EP, Alive at the Dynamo in 1989, in live form. The song "Surf Nicaragua" contains a part from the song "Wipe Out" as well as the drum part from the Hawaii 5-0 theme song.

This is a 2021 reissue of this classic LP, cames in a jewel case complete with an 8 page booklet. Formed in 1985, Sacred Reich were an integral part of the 80s and 90s thrash movement, dropping four...

Twenty-three years after dropping their last full-length, Sacred Reich are returning in force with the towering Awakening, effortlessly demonstrating that they remain a formidable...