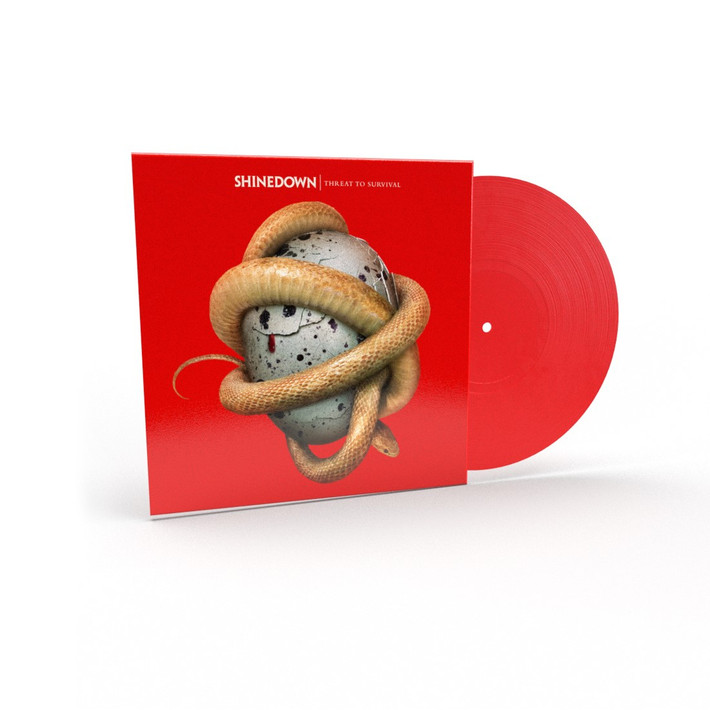 LP Pressing of Threat To Survival on Clear Red Colored Vinyl Multi-platinum, record-breaking band Shinedown - Brent Smith [vocals], Zach Myers [guitar], Eric Bass [bass, production], and Barry Kerch [drums] - have sold more than 10 million albums and 10 million singles worldwide, earned 14 platinum and gold singles, five platinum and gold albums, and amassed more than 2.7 billion total streams. Recent hits "Atlas Falls," "ATTENTION ATTENTION," "GET UP," "MONSTERS" and "DEVIL" bring their total to 17 No. 1s on the Mediabase Active Rock Chart and 16 No. 1s on the Billboard Mainstream Rock Songs Chart, breaking the record for the most No. 1s ever in the history of the Billboard chart. Additionally, all of Shinedown's 27 consecutive career singles have reached the Top 5 of the Billboard Mainstream Rock Songs Chart, another unparalleled achievement. Tracklist: Side A: 1. Asking For It 2. Cut The Cord 3. State Of My Head 4. Outcast 5. How Did You Love 6. It All Adds Up Side B: 1. Oblivion 2. Dangerous 3. Thick As Thieves 4. Black Cadillac 5. Misfits
×

'Survival Of The Sickest' offers no respite from the horrors of reality. Instead, Bloodbath’s latest and greatest album gleefully confronts the slavering ghoul lurking in the shadows, and treats him...

Gatefold Double LP Pressing of Us and Them on Clear Purple Colored Vinyl. The artwork has been updated in celebration of the 15th Anniversary of this album. Multi-platinum, record-breaking band...