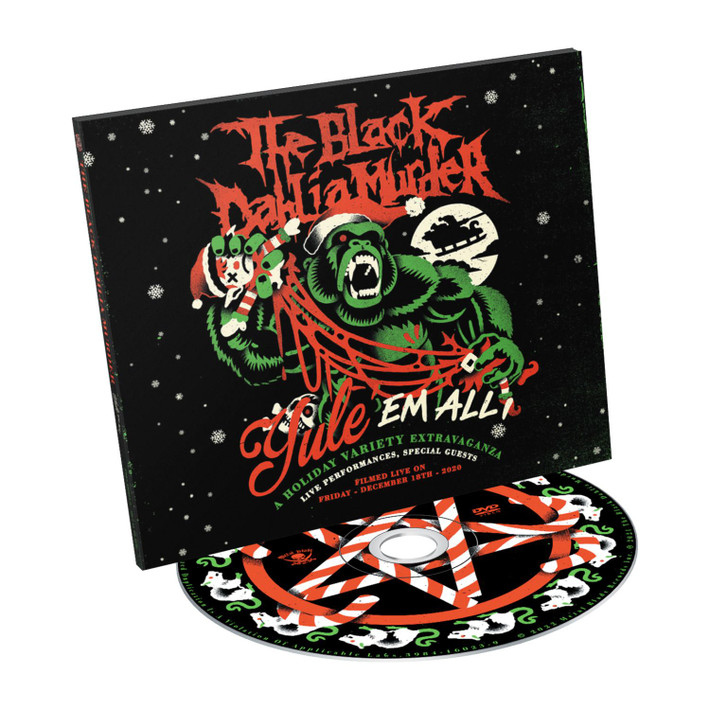 Originally set for release in July of 2022, before the heartbreaking and untimely death of beloved frontman Trevor Strnad, The Black Dahlia Murder‘s 'Yule ‘Em All: A Holiday Variety Extravaganza' will now be available as a limited edition DVD Digipak.

On October 28th at Saint Andrew’s Hall in Detroit, Michigan’s The Black Dahlia Murder will be playing their first show since Trevor’s passing. The show will be a celebration of the life and legacy of Trevor Strnad who was lost to us all on May 11th this year. This show also marks the first performance with the band’s new/old lineup with founding member Brian Eschbach taking on lead vocals and the return of Ryan Knight on guitar along with long-time members Max Lavelle on bass, Alan Cassidy on drums, and Brandon Ellis on lead guitar and backing vocals. Support for the show will come from Darkest Hour and Plague Years.

About the release – originally released in December of 2020:
Detroit’s Kings of the Underworld, The Black Dahlia Murder, present their 'Yule ‘Em All: A Holiday Variety Extravaganza' program hosted by Neil Hamburger (Pick Of Destiny, Tim and Eric). This feel-good metal holiday special contains live performances of 16 beloved tracks from the band’s extensive catalog, original comedy skits featuring band members, and a special appearance by George “Corpsegrinder” Fisher (Cannibal Corpse)! The DVD version also comes with a special commentary track by band members and producers of the special. Raise your glass of eggnog and prepare to toast to the season’s finest offering of Yuletide joy and laughter.

The Black Dahlia Murder is an American melodic death metal band from Waterford, Michigan, formed in 2001. Their name is derived from the 1947 unsolved murder of Elizabeth Short,...

The Black Dahlia Murder is an American melodic death metal band from Waterford, Michigan, formed in 2001. Their name is derived from the 1947 unsolved murder of Elizabeth Short, often referred to as...