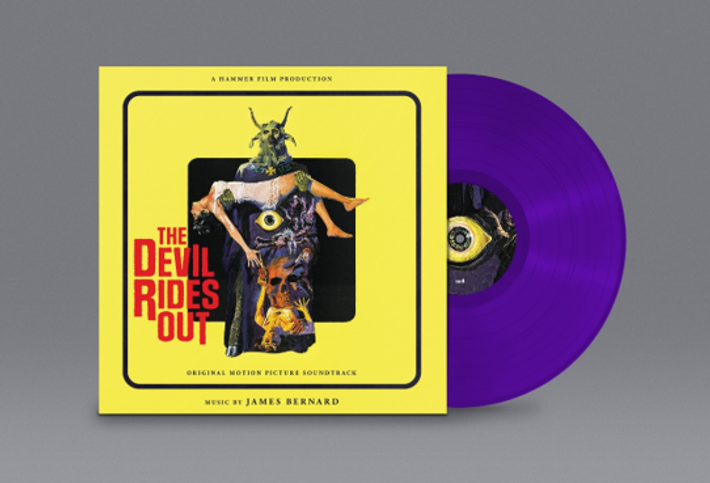 Making its debut on vinyl is James Bernard’s soundtrack to Hammer’s classic 1968 film 'The Devil Rides Out'. Hammer built on previous success in the horror genre by seeking literary adaptations, and this film is based on the Denis Wheatley novel of the same name. The script was written by Richard Matheson, himself a successful author of the novel, 'I Am Legend' (1954), and with gothic horror maestro Terence Fisher directing, the resulting film remains one of Hammer’s most popular.

The story follows Nicholas, The Duc de Richleau (Christopher Lee) in his fight against a devil-worshipping cult. The Duc rescues his young friends and destroys the cult, with good triumphing over evil in a rare heroic role for Lee.

The supernatural suspense is further realised by Bernard’s tense soundtrack, and his music has since become synonymous with Hammer’s horror oeuvre. James Bernard had already scored releases for Hammer including 'The Curse of Frankenstein' (1957) and 'Dracula' (1958), and his distinctive clashing strings and driving percussion instantly conjure this iconic Hammer film.

Limited purple vinyl pressing - *please note that this product is new, but comes with no shrinkwrapping and is NOT sealed - this is the policy of Silva Screen Records, who are reducing their use of single use plastics*

7. The Spirit In The Observatory

8. The Eve Of Mayday / Mocata's Presence

2. Tanith Controls Rex / Inside The Circle

4. The Angel Of Death

5. The Battle Is Lost / The Power Of Mocata

The updated version of Silva Screen’s long deleted and sought after 2000 reissue of John Carpenter’s sparse, piano-driven ambient/electronic score to ‘The Fog’. This release brings together not just...

You talkin' to ME?'; undeniably one of the most famous quotes from movie history and from one of its most memorable characters. Travis Bickle, the frustrated Vietnam veteran in 'Taxi Driver'; the...

Could you think of any other film producer that picks better soundtracks than the widely revered Quentin Tarantino? Inventing a genre on his own, his string of best-selling nouvelle...

'Midsommar' is a folk horror film written and directed by Ari Aster. It follows a couple (played by Florence Pugh and Jack Reynor) and their friends who travel to Sweden for a festival that...