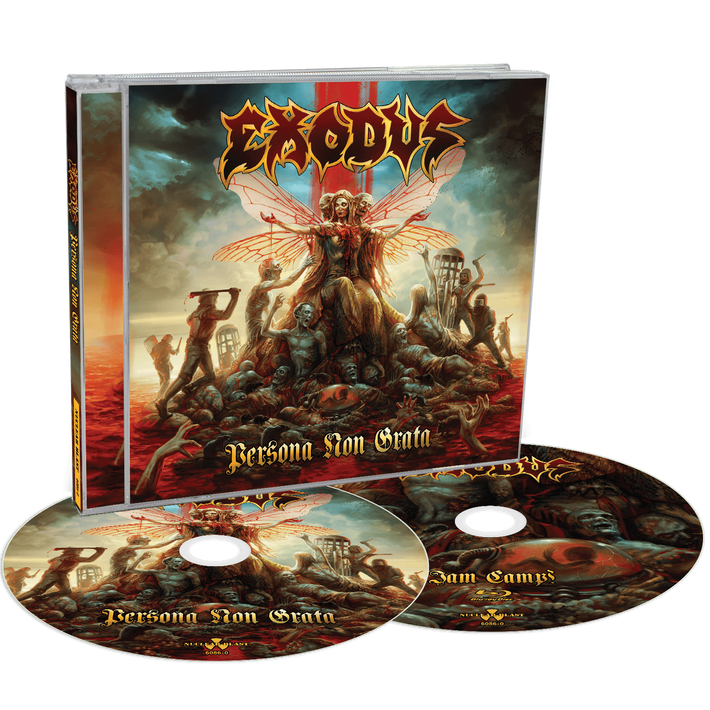 When we think of the phrase Bonded By Blood, we think of two things: a brotherhood that is meant to outlast the trials of war, pain, and time... and the almighty EXODUS. With a bond forged in youth and decades-old friendship, the undisputed masters of thrash metal return with their eleventh studio album: PERSONA NON GRATA. Literally translating to “an unwelcome” or “unacceptable” person, PERSONA NON GRATA touches on themes of modern societal disgust and degradation. “The people that disgust you - cut ‘em out like cancer,” explains guitarist Gary Holt. “Who is that person? It could be anybody. That’s up to the listener. Who is ‘Persona Non Grata’ to them?”

For decades, EXODUS has impressed us with the ability to attract opposing factions to their music because of its intensity and versatility. A track like “The Beatings Will Continue Until Morale Improves” was inspired by the riots both in theme, and sound. “Without seeming insensitive to the riots, the song is tongue in cheek about what the people beating on the rioters were expecting to happen. Did you think you would beat a smile onto their face? At 3 minutes in length, it’s probably the shortest EXODUS song we’ve ever done. It gets in, gets out, and is just crushing,” describes Holt. While most of the songs do run on the shorter side, this album also comes equipped with crushing, epic tracks.

Sitting as the second to last song on the album, “The Fires of Division” keeps PERSONA NON GRATA strong all the way through. “This album doesn’t operate on the normal parameters,” describes Holt, “we didn’t frontload this one, it’s strong right through to the end. It’s supposed to be a musical journey as the songs segway together.”

6.The Beatings Will Continue (Until Morale Improves)

7.The Years Of Death And Dying

11.The Fires Of Division

For many years now, the comparative of epic has simply been EPICA. Since their formation in 2002 and their quick ascension to stalwarts of symphonic metal noblesse with trailblazing masterpieces...

This year marks the 40th anniversary of Frost and Fire, the groundbreaking album where the legend and lore of Cirith Ungol began.  The fabled kings of the dead are celebrating this...

This year marks the 40th anniversary of Frost and Fire, the groundbreaking album where the legend and lore of Cirith Ungol began.  The fabled kings of the dead are celebrating this...