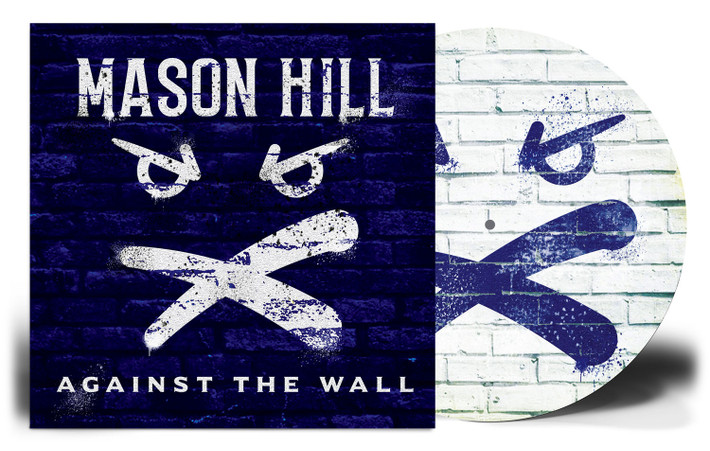 <h4><strong><a href="https://fpt.fm/app/25046/pre-save-mason-hill" target="_blank">Click here for the Mason Hill digital presave link</a></strong></h4>
<p>Hotly tipped Scottish rock outfit, Mason Hill, are proud to announce the release their debut album &ldquo;Against The Wall&rdquo; via 7Hz Recordings</p>
<p>To trace the Mason Hill story to its origin, Scott Taylor and James Bird met at school in Glasgow. At the age of 14, Bird was already an accomplished, award-winning, gifted guitar prodigy, who&rsquo;d shared a stage with Ozzy Osbourne/Black Label Society man Zakk Wylde, a personal hero, toured across the UK, and secured endorsements from leading music brands. The teenage Taylor already harboured dreams of fronting a rock &rsquo;n&rsquo; roll band, and the pair&rsquo;s friendship and shared aspirations led them to form a band. In 2013 the pair formed Mason Hill, adding drummer Craig McFetridge, bassist Matthew Ward and guitarist Marc Montgomery in due course. Five diverse, colourful characters, the members of the group were instantly bonded by a shared, singular vision for their band: Taylor relinquished long-held plans to become an Olympic swimmer in order to focus on music, while Ward withdrew from a degree course at the University of Glasgow, where he&rsquo;d been studying microbiology/virology. For these ambitious young men, Mason Hill was and is priority number one.</p>
<p>Taylor explains: &ldquo;It&rsquo;s finally here! Our debut album Against The Wall is the culmination of 5 years of literal blood, sweat, tears and everything in between! The whole process has been beset by about everything known to man but we&rsquo;ve finally prevailed and couldn&rsquo;t be happier. Now if only we could get out and tour again in 2021 &ndash; it&rsquo;s going to be great year for us either way and we can&rsquo;t wait&rdquo;</p>
<p><br />Mason Hill are Scott Taylor (lead vocals), James Bird (lead guitar), Marc Montgomery (guitar), Matthew Ward (bass) and Craig McFetridge (drums)</p>
<p>Yellow Vinyl LIMITED TO 300 COPIES</p>
<p>Track List</p>
<p>Side A<br />01 Reborn<br />02 No Regret<br />03 Against the Wall<br />04 Broken Son<br />05 DNA <br />06 Who We Are<br />07 Find My Way</p>
<p>Side B<br />08 Hold On<br />09 Out of Reach<br />10 We Pray<br />11 Where I Belong<br />12 Reborn (Reprise)<br />13 Who We Are (Acoustic Unplugged)</p>