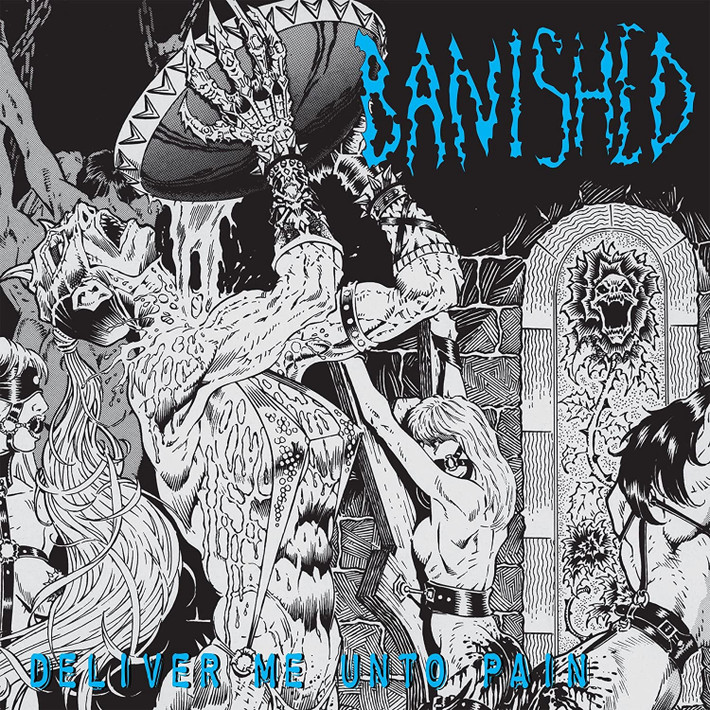 THE 1994 RELEASE OF NO-NONSENSE BRUTAL DEATH METAL FROM BUFFALOS BANISHED, PRESENTED ON THE VINYL FORMAT.

Banished formed in Buffalo New York in 1987, initially under the name of Baphomet, and belonged to the early prolific generation of US death metal, beginning with their Morbid Realities demo in 1989, & then the The Dead Shall Inherit debut for Peaceville in 1992.

Baphomet developed a strong profile alongside fellow New Yorkers Suffocation and Immolation for shaping the brutal end of the death metal spectrum in the early 1990s when the scene was truly flourishing, followed by a name change to Banished on the run up to the bands second album.

Retaining the same line-up, Banished entered Mark Studios in spring 1993 to record the Deliver Me Unto Pain album, which was released by Deaf/ Peaceville Records in 1994 before Banished finally disbanded in 1995. A fitting follow-up and a fine example of no-nonsense relentless brutality, the album was warmly received in extreme metal circles & as a result Banished/Baphomet remain a cult act to this day.

A1. Diseased Chaos
A2. Deliver Me Unto Pain
A3. Cast Out The Flesh
A4. Skinned
A5. Inherit His Soul
A6. Valley Of The Dead
B1. Succumb To The Fear
B2. Altered Minds
B3. Scars
B4. Anointing Of The Sick
B5. Enter The Confines
B6. Through Deviant Eyes

Unto Others 'Strength' LP White Vinyl

Comprised of Gabriel Franco (Vocals / Guitar), Brandon Hill (Bass), Sebastian Silva (Guitar), and Colin Vranizan (Drums), Unto Others formed in Portland, OR in 2017 and quickly made waves out of the...

'Please Please Me ' is the debutstudio album by The Beatles, released in March 1963. It features classics like 'I Saw Her Standing There', 'Twist and Shout' and 'Love Me Do' Tracklisting: 1. I Saw...