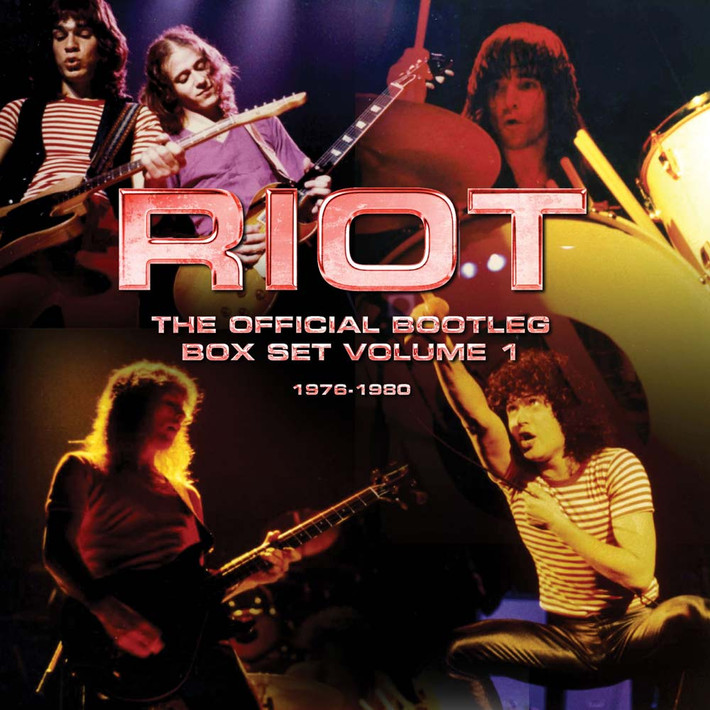 Riot’s story is one of what might have been, and to some degree, a band being (or not) in the right place at the right time. What this 6 CD live collection does offer is unique, and often raw, insights into the growth and development of an influential hard rock and heavy metal band, as they graduated from small clubs in 1976 through to huge festivals in 1980.

Adding second guitarist Louie Kouvaris, whilst replacing Feit with Jimmy Iommi on bass, they released their debut “Rock City” in 1977. But by 1979, on the verge of splitting up, they were thrown a lifeline by highly influential New Wave Of British Heavy Metal DJ, Neal Kay, who set about promoting Riot in the UK. Re-engerized, the band issued second LP, “Narita” in 1979, at which point Kouvaris was replaced by their roadie, Rick Ventura.

Signing to major label Capitol Records, this subsequently led to a UK tour in 1980 supporting Sammy Hagar (from where the Bristol show here was taken), and eventually a slot at the legendary “Monsters of Rock Festival” at Castle Donington the same year, on a bill featuring Saxon, Judas Priest, Scorpions and headlined by Rainbow.

Mastered from tapes in the collection of the estate of founder member and guitarist Mark Reale, “The Official Bootleg Box Set Volume 1” captures the band at their formative, early club stages in 1976, where much of their repertoire included songs by the bands that had influenced them, such as their covers on Montrose’s ‘I Got the Fire’, ‘Good Rockin’ Tonight’ and ‘Rock Candy’, to UFO’s ‘Shoot Shoot’ and Deep Purple’s ‘Highway Star’, included amongst Riot originals, ‘Angel’, ‘Overdrive’ and ‘Tokyo Rose’. This 6 disc set concludes with their aforementioned Castle Donington slot in 1980.

Riot would release their most successful album, “Fire Down Under”, the following year, but that’s another story…

**PLEASE NOTE: Whilst every effort has been made to produce the best possible audio, limitations in the material drawn from various, non-standard, and unoffical sources means that the quality may not be up to the standard usually expected. All tracks have been included for their historical importance, and to present an alternative anthology of RIOT live on stage from 1976-1980.

Overkill are an American thrash metal band, formed in 1980 in New Jersey. They are often called 'the Motörhead of thrash metal', based on their unique playing style, which was influenced by punk rock...

Formed in Jacksonville, Florida in 1971 by guitarist Dave Hlubek, and fronted by singer, Danny Joe Brown, Molly Hatchet were easily able to fill arenas across the States by the time their second LP...

Four CD box set of live recordings by the unashamedly heavy metal legends The Rods. A raw and often uncompromising set of illicitly made and under the counter sold, eaturing live sets from the...

Venom are an English extreme metal band formed in 1979 in Newcastle upon Tyne. Coming to prominence towards the end of the new wave of British heavy metal, Venom's first two albums — 'Welcome to...

Restless Breed is the fourth album from US Metal act Riot, the first with vocalist Rhett Forrester, released in 1982 This version comes as a 2LP pressing on opaque red vinyl, and includes 6 bonus...

Born in America is the fifth studio album us US Metal act Riot, released in 1983, and the last album with vocalist Rhett Forrester Tracklisting: Side A: 1. Born In America 2. You Burn In Me 3. Wings...