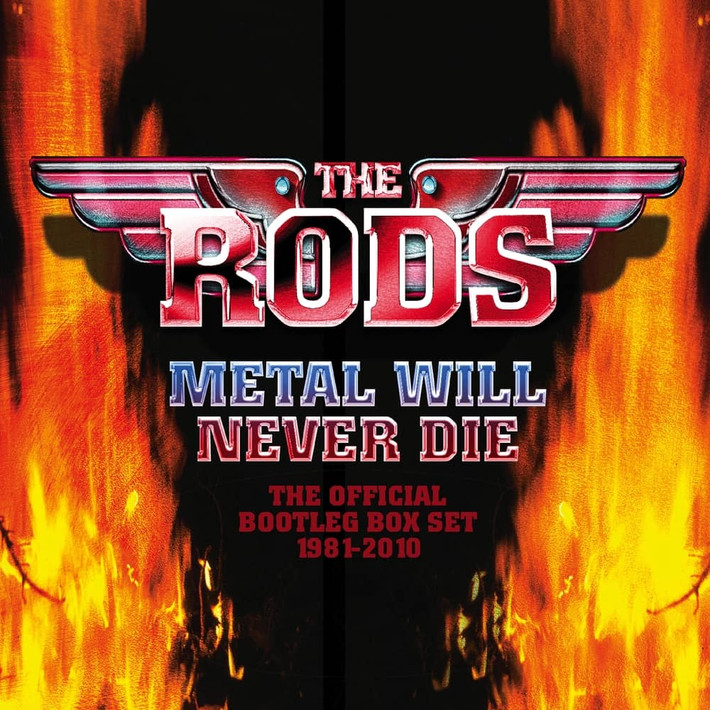 Four CD box set of live recordings by the unashamedly heavy metal legends The Rods. A raw and often uncompromising set of illicitly made and under the counter sold, eaturing live sets from the early ‘80s and more recently 2009 and 2010.

The Rods’ debut album, ‘Rock Hard’, was released in 1980, retitled simply ‘The Rods’ the following year, it was swiftly followed by the ‘Full Throttle’ EP, material from these releases making up the bulk of CD One which was recorded across two concerts in 1981 and 1982 in HM stronghold, El Paso, Texas.

Finding champions in the rock and metal press, especially UK’s Kerrang! magazine, they released the ‘Wild Dogs’ LP in 1982, their rising popularity making them the perfect opening act for Iron Maiden on their Beast On The Road UK tour, which is captured here on CD Two.

Reunited in 2008 with the Feinstein and Canedy joined by Gary Bordonaro on bass, they became a firm festival favourite, especially in Europe as was captured at the Headbangers Festival in Germany in 2009 which features on CD Three.

Comeback album ‘Vengeance’ was released in 2011 to positive reviews, featuring tracks that had been previously previewed at a performance in their hometown of Cortland, New York in 2010, which is featured here on CD Four.

While every effort has been made to produce the best possible audio, limitations in the material drawn from various, non-standard, and unofficial sources means that the quality may not be up to the standard usually expected. All tracks have been included for their historical importance.

"Thy Primordial - The Blackend years" features four classic albums the band released through the pioneering metal label Blackend. The albums included are "Where Only The Seasons Mark The Paths Of...

Riot’s story is one of what might have been, and to some degree, a band being (or not) in the right place at the right time. What this 6 CD live collection does offer is unique, and often raw,...

Although Raven’s origins date as far back as 1974, they came to the attention of the British rock media with the 1980 release of their debut single, ‘Don’t Need Your Money’. Hailing from Newcastle,...

With roots going back to 1964 when this fledgling bunch of Southern Rockers from Jacksonville, Florida were playing colleges before graduating to local bars, Lynyrd Skynyrd were primed for...

Three key albums from legendary hair metal glamsters Faster Pussycat from the end of the ‘80s and early ‘90s including a host of bonus tracks and the EP ‘Live And Rare’ from...

Although Raven’s origins date as far back as 1974, they came to the attention of the British rock media with the 1980 release of their debut single, ‘Don’t Need Your Money’...

Tokyo Blade originally formed in 1982, releasing their self-titled debut in 1983 (CD 1 of this release). Formed around guitarist Andy Boulton, he was joined on their debut by Alan Marsh on lead...