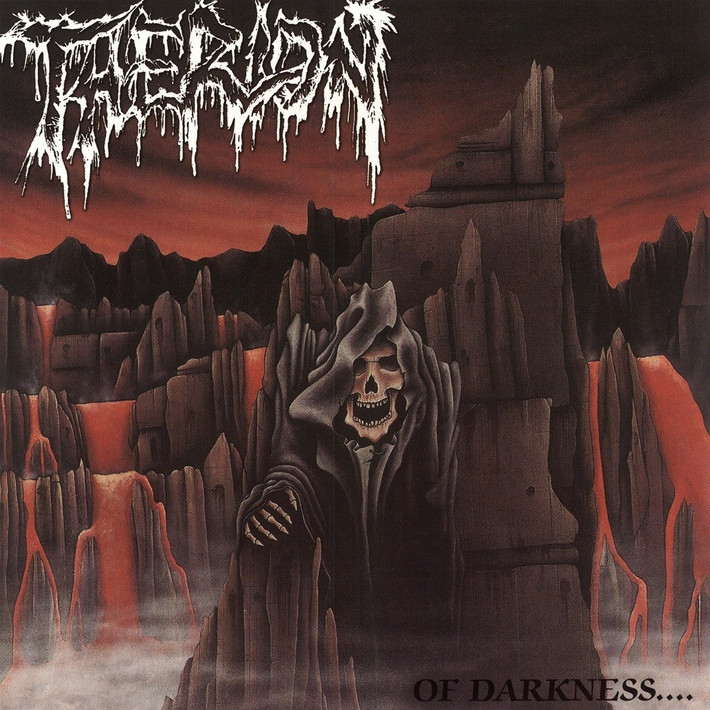 Swedish act Therion originated in the late 1980s. Following a couple of demos in 1989, the band’s style evolved out of an effective and raw mix of Thrash/Death Metal. The demo Time Shall Tell gained the attention of Deaf/Peaceville Records and led to the release of the band's debut studio album, 'Of Darkness…’, featuring songs which mainman Christofer Johnsson had composed in the 1980s.
The album could be defined as an early example of Progressive Death Metal, though also included influences from other genres, distinguishing the band from traditional Death Metal acts of the time.
The album was recorded at Sunlight Studio in Stockholm (Entombed, Katatonia, Amorphis), with producer Tomas Skogsberg.
Therion later went on to great success in the Symphonic Metal field.
Tracklisting:
1. The Return
2. Asphyxiate With Fear
3. Morbid Reality
4. Meglomania
5. A Suburb to Hell
6. Genocidal Raids
7. Time Shall Tell
8. Dark Eternity
×

Swedish act Therion originated in the late 1980s. Following a couple of demos in 1989, the band’s style evolved out of an effective and raw mix of Thrash/Death Metal. The demo Time Shall Tell gained...

'Into Cold Darkness' is the second album by Vital Remains. It was released in 1995 by Peaceville Records, the last to feature lead guitarist Paul Flynn and vocalist Jeff Gruslin and the only album to...

'The Roundhouse Tapes' contains a powerful and atmospheric Opeth performance recorded at the Camden Roundhouse, London on November 9th, 2006. The concert saw the band in scintillating form...

'Be Forewarned' is the third album by Virginia doom metal band Pentagram. It was released in 1994 by Peaceville Records. Starting life in the early 1970s, Pentagram are one of the most enduring and...

My Dying Bride 'Like Gods of the Sun' CD

My Dying Bride have been the leading light of doom metal since their debut album "As The Flower Withers" was released on Peaceville Records back in 1992. Influenced by acts such as Celtic Frost and...

'Relentless' is the debut studio album from Virginia doom metal band Pentagram. It was self-released in 1985 as 'Pentagram', but was reissued by Peaceville Records in 1993 with the new title and...